“To conduct the works of Karl Jenkins is an experience of sheer delight, deep emotion & revelation of the spirit for musician & audience.” 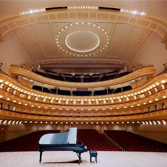 New York fans will get the chance to hear the US premiere of Sir Karl’s new Miserere: Songs of Mercy and Redemption at Carnegie Hall on 20 January. This special concert is being held to mark the 20th anniversary of his acclaimed composition The Armed Man: A Mass for Peace, which is also on the programme.

The concert is hosted by longstanding supporters of Sir Karl’s music Distinguished Concerts International New York. In recent years, DCINY have presented the world premiere of Sing! The Music Was Given in 2018 and the US premiere of Symphonic Adiemus in 2019.