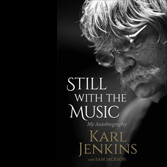 Anyone coming fresh to Karl Jenkins’s music today is sure to be amazed by its stylistic range and all-encompassing variety. Music for choirs, orchestras and soloists, for commerce, film and theatre, performed in styles as varied as classical, ecclesiastical, ethnic and jazz-rock. Music that is often erudite but always accessible and welcoming. Such is merely to hint at the musical versatility of Karl Jenkins, or Sir Karl, as he became after his knighthood in June 2015.

Now, this British national treasure, who celebrated his 70th birthday last year, has released his autobiography, Still With the Music (Elliott & Thompson publications).

Still With the Music: The Album is a companion to the autobiography, a 16-track collection of music from Karl Jenkins’s best-selling albums, spanning 20 years of music making from Adiemus - Songs of Sanctuary (1995) to the world-premiere recording of 'The Canticle of Simeon' from his major new workThe Healer.

A second, more comprehensive collection of Sir Karl's music will also be released on 25 September. The 8 CDs that make up the Voices collection are a glorious celebration of the human voice for which Karl writes so beautifully. Bryn Terfel has said that Karl always produces ‘impeccable writing for a multitude of voices and instruments’, a skill that in some surveys has made him the most-performed living composer in the world.