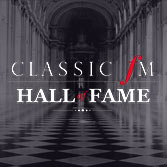 Classic FM have officially opened their Hall of Fame 2020 – the world’s biggest poll of your classical music tastes.

It’s as easy as voting for your three favourite pieces of classical music and ranking them. Votes are weighted in terms of preference. A first choice vote is attributed 3 points, a second choice vote 2 points and a third choice vote 1 point. Votes should be entered in order of preference and the final chart is dependent on the total number of points assigned to each piece.

Last year Sir Karl was the highest ranked living composer with The Armed Man: A Mass for Peace. Can it feature even higher this year?