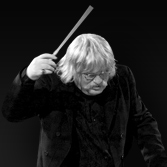 Jan 17th, 2011 [Martin Luther King Day] sees the USA premier at Carnegie Hall [conducted by Jonathan Griffith] of the recently released Gloria while next year, in what is sure to be an emotional evening, Karl is scheduled to conduct a performance of The Armed Man at Avery Fisher Hall, Lincoln Center, New York on the anniversary of 9/11.

A recent exhaustive global survey has shown Karl Jenkins to be the most performed living composer in the world today.