“How would you describe the music of Karl Jenkins in one word? Enthralling” 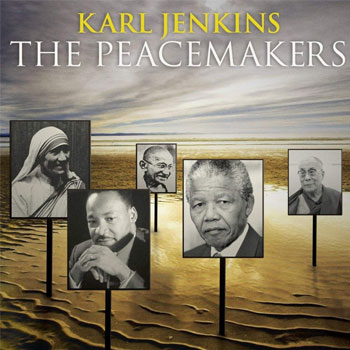 The Peacemakers enters the UK Specialist Classical Charts at No1.

The Peacemakers, a brand new choral work composed by Karl Jenkins, offers inspiration and solace for a time in need of both. It features texts from some of the greatest peacemakers throughout history, including Gandhi, Martin Luther King Jr., the Dalai Lama, Nelson Mandela, Anne Frank and Mother Teresa, as well as words from the Bible and the Qur’an with some new text specially written by Terry Waite.

The London Symphony Orchestra is joined by different vocal forces including Rundfunkchor Berlin, the City of Birmingham Youth Chorus, and the 1000-strong “The Really Big Chorus” made up of members of UK choirs from across the country brought together in one day, in one studio, to contribute to two movements on the album. Guest artists include violinist Chloë Hanslip, soprano Lucy Crowe, Davy Spillane on Uilleann pipes, Indian bansuri (ethnic flute) player Ashwin Srinivasan and jazz greats Nigel Hitchcock and Laurence Cottle.