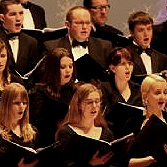 Tenth anniversary of The Armed Man: A Mass for Peace

Following his prestigious award of the CBE from Her Majesty the Queen in her recent Birthday Honours list “for services to music” and the release of Gloria & Te Deum a recent exhaustive survey has shown Karl Jenkins to be the most performed living composer in the world today.

2010 is the tenth anniversary of The Armed Man: A Mass for Peace, an event celebrated by a series of concerts, conducted by Karl, and the autumn release of a special edition package that includes the re-mastered CD and a DVD of a televised broadcast conducted by the composer. An extra new piece has been added to the CD, For the Fallen: In Memoriam Alfryn Jenkins. As Karl says, “This setting of the iconic Laurence Binyon poem [ ‘They shall grow not, old as we that are left grow old…’ ] ,which incorporates The Last Post in the orchestration, is dedicated to the memory of Alfryn Jenkins, my uncle & viola player, who was captain of a Lancaster bomber that was lost, with an all Welsh crew, over Berlin in 1944. The piece features Hayley Westenra, Bernard Cribbins [eminent actor and one time paratrooper] as narrator, The National Youth Choir of Great Britain & the London Symphony Orchestra.” It will be premiered at this year’s Festival of Remembrance at the Royal Albert Hall.

The London anniversary concert is at the Royal Festival Hall on Oct 31st and features the National Youth Choir of Great Britain and the Philharmonia Orchestra. The previous evening [Oct. 30th] sees a performance at the De Monfort Hall, Leicester, again with the Philharmonia but with the Leicester Philharmonic Choir while St.David’s Hall, Cardiff, welcomes the Cory Band [World Brass Band Champions] with massed Welsh choirs in performing the work.

The first half of the London concert sees the premier of a new work written for Kazakh violin virtuoso, Marat Bisengaliev, with whom Karl has had a long musical relationship.‘Shakarim’ is inspired by the work of the Kazakh poet and musician Shakarim Kudaiberdiuly [1858-1934] and features the same participants as The Armed man together with Marat & some Kazakh ‘ethnic foilk soloists’. Two movements from the violin concerto written for Marat completes the first half.

On November 26th Karl conducts his Christmas works, Stella Natalis and Joy to the World, featuring Tenerbrae, the choir that recorded the works, at St Lukes Church, Grayshott, Surrey.

Jan 17th, Martin Luther King Day, sees the USA premier at Carnegie Hall [conducted by Jonathan Griffith] of the recently released Gloria while next year, in what is sure to be an emotional evening, Karl is scheduled to conduct a performance of The Armed Man at Avery Fisher Hall, Lincoln Center, New York on the anniversary of 9/11.