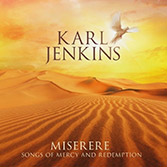 New album Miserere: Songs of Mercy and Redemption is out now

‘Miserere: Songs of Mercy and Redemption’ is out now.

Sir Karl Jenkins continues his 75th birthday year celebrations with a brand-new album, Miserere: Songs of Mercy and Redemption, released on 11th October. The new work, released on Decca Records, is dedicated to all who have suffered or perished during the conflicts in the Middle East over the last 70 years. Karl was motivated by the desperate situation for the millions of people displaced and impacted by the cruel effects of war and hoped the healing and uniting powers of music could be used to bring together people from different religions.

Speaking ahead of the release, Stephen Layton said, “Miserere is such an intriguing juxtaposition of many elements – I do believe it will catch the imagination around the world. It’s rare I find myself singing things over and over again. There is something very enduring and uniquely wonderful here which I love. I’m honoured to have had the opportunity to record this fantastic music.”

Also featured is the Britten Sinfonia and former Royal Harpist to H.R.H. the Prince of Wales Catrin Finch. Sir Karl has integrated Middle Eastern instruments in his new work, with vocals by singer Belinda Sykes, who also performs on mey, and Maya Youssef on qanun, with Zands Duggan and Jody Jenkins providing percussion.

Sir Karl Jenkins’ wide-ranging approach to the composition of this work is reflected in his use of ancient Latin, Aramaic, modern-day Arabic and Hebrew texts. Carol Barratt, Lady Jenkins, wrote the words to the closing movement, Contemplation and Benediction, adapted by her from sayings pertaining to ‘mercy’ by Rumi (1207-1273), the Sunni Muslim and Persian poet and philosopher. The words used in Miserere are drawn from Psalm 51 from the Hebrew Book of Psalms, used as a liturgical text in music throughout history, from the Renaissance (Josquin des Prez) and Baroque (Allegri, J. S. Bach, Pergolesi) eras to Romantic and Contemporary interpretations by Verdi, Górecki and Pärt.

This autumn brings first performances of Miserere with selections from the score included in the composer’s sold-out 75th birthday concert at the Royal Albert Hall (13th October), performed by the Crouch End Festival Chorus and Royal Philharmonic Orchestra. The complete 45-minute work will be unveiled by Iestyn Davies, Abel Selaocoe, Polyphony and the Britten Sinfonia under Stephen Layton at a sold-out event presented by Grayshott Concerts, Hampshire (29th November) with a broadcast on Classic FM.