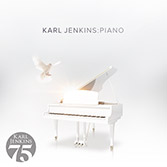 Sir Karl Jenkins is celebrating his 75th birthday with a brand-new album, tour and a host of reissues from his immensely popular catalogue – all now available on Decca Records. The new album is entitled ‘Piano’ and sees Sir Karl at the keyboard for the first time, performing original piano versions of his best-loved works as well as two new compositions. The album will be released on 8th February, to coincide with Sir Karl’s UK tour which starts on 10th February in his native Wales – just ahead of his 75th birthday on 17th February.

Sir Karl’s prolific career spans the worlds of classical, jazz, TV and film music. His new album goes back to where it all started – composing beautiful melodies at the piano. Sir Karl’s new arrangements are drawn from across his choral and symphonic oeuvre, with piano versions of some of his most famous pieces including Adiemus, Palladio, ‘Pie Jesu’ from Requiem and ‘Benedictus’ from The Armed Man. There are also two completely new compositions: the jazz-influenced Quirky Blue and White Water – a flowing piano piece in which Sir Karl duets with his wife – Lady Jenkins, Carol Barratt. The whole album was produced by their son Jody Jenkins, making it a true family affair.

Sir Karl Jenkins says, “When I first wrote these pieces, I was thinking about them in an orchestral style, so this album has given me the opportunity to go back to the origins and recreate them on piano in an intimate and personal way. It has been quite nostalgic and also very enjoyable to revisit my old scores and transform them into something new.”