“The music of Karl Jenkins is a gift to humanity” 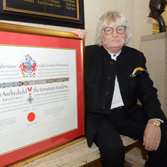 On the 4th October Sir Karl was honoured with the Freedom of the City of Swansea in a ceremony at the Swansea Guildhall. On receiving the award Sir Karl commented: “This is a massive honour for me. A few years back I was given the Freedom of the City of London but this means so much more to me. Growing up Swansea was always my home town and then, in 1969, it became my home city. I feel privileged to be so honoured.”

Sir Karl’s new work Lamentation, performed alongside perennial favourites The Armed Man: A Mass for Peace and For the Fallen, received a standing ovation at Brangwyn Hall at one of the closing events of the Swansea International Festival 2018.Lamentation sets a text entitled Lament for Syria by Betjeman award-winning young poet and Syrian refugee Amineh Abou Kerech.

Sir Karl presenting Amineh Abou Kerech with a signed copy of the music after the premiere of Lamentation. (Image reproduced by permission)