“I wish I had his talent to compose tunes but am proud to consider myself as one who adores to sing them.” 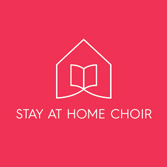 Sing Sir Karl Jenkins’ Adiemus and The Armed Man: A Mass For Peace with the Stay at Home Choir

Sir Karl Jenkins is the next featured composer for the Stay At Home Choir. Over the next several weeks members will be exploring two of Sir Karl’s most popular choral works: Adiemus and The Armed Man: A Mass For Peace.

Stay at Home Choir is a global musical community of 10,000+ members who come together to interact with and perform alongside some of their favourite artists. Previous collaborations have included the Royal Philharmonic Orchestra and The King’s Singers. The Sixteen were the third ensemble to get involved as four of its singers led 5 evenings of webinars coaching members through Sir James MacMillan’s O Radiant Dawn. Videos were submitted from members singing their part in 54 countries and work has now begun to stitch them all together into a virtual ensemble, which will be released next month. The most recent project has been working with The Swingles, singing Marvin Gaye’s Motown classic ‘You’re All I Need To Get By’.

The first is Adiemus, one of Sir Karl’s Songs of Sanctuary. In these strange times when we are all seeking sanctuary, whether it is in our homes or in the landscape around them, this piece seems a timely choice. Members will be encouraged to submit video footage of what they regard as their ‘sanctuary’, and will be given learning resources and guidance from conductors and coaches in order to submit a recording of themselves to contribute towards a professionally engineered collaborative recording.

Members will also be given a special opportunity to take part in the largest-scale virtual choir recording ever attempted; a virtual performance of five key movements from The Armed Man: A Mass for Peace. In a Stay at Home Choir first, members will be conducted by Sir Karl and accompanied by the World Orchestra for Peace for their final video. This project will involve a programme of interactive choral activities over a ‘rehearsal period’ of several weeks, with learning resources, live interactive involvement from Sir Karl, and much more singing! Members will be asked for a small donation for this larger project to cover engineering costs for the choir. This is a wonderful way to mark the 20th anniversary of The Armed Man and keep people singing during the COVID-19 crisis.