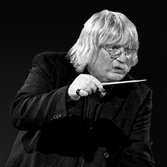 “Stunned, overpowered, moved - these were some reactions I overheard from audience members following Karl Jenkins' The Armed Man: A Mass For Peace, the work chosen for the opening of the 57th Cork International Choral Festival. Jenkins conducted the RTE Concert Orchestra, (the) Lady's Choral Society, and mezzo soloist Sharon Carty in a superb performance of his most famous, justifiably popular work…

When these skills are combined with an inventive text and a back-drop of filmed images of war, pictures of political leaders who have sent their armies to war, and images of the frightful consequences of war and terrorism, the emotional impact is overwhelming.”