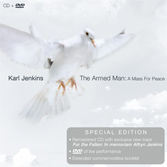 Release of The Armed Man: A Mass for Peace

The voices of Bernard Cribbins and Hayley Westenra feature on new piece for the fallen.