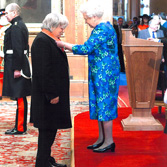 On Nov 16th Karl received his CBE from Her Majesty the Queen at Windsor Castle, an event which rounded off a frantic two week period. 2010 is the tenth anniversary of The Armed Man: A Mass for Peace, a date just celebrated by three sell-out concerts at the RFH [London], Leicester & Cardiff, all with standing ovations. There is now available, to commemorate the anniversary, a special edition package that includes the re-mastered CD and a DVD of a televised broadcast conducted by the composer. An extra new piece has been added to the CD, For the Fallen: In Memoriam Alfryn Jenkins. As Karl says, “This setting of the iconic Laurence Binyon poem ['They shall grow not old, as we that are left grow old…' ] ,which incorporates The Last Post in the orchestration, is dedicated to the memory of Alfryn Jenkins, my uncle & viola player, who was captain of a Lancaster bomber that was lost, with an all Welsh crew, over Berlin in 1944. The piece features Hayley Westenra, Bernard Cribbins [eminent actor and one time paratrooper] as narrator, The National Youth Choir of Great Britain & the London Symphony Orchestra.” The piece was premiered before the Queen on Nov. 13th at this year’s Festival of Remembrance at the Royal Albert Hall.

2011 sees the world premier of The Bards of Wales, a new symphonic work based on a ballad by the Hungarian poet, Janos Arany, that relates to the tale of King Edward I of England executing five hundred Welsh bards for failing to sing his praises at a banquet in Montgomery Castle in 1277. The Budapest performance will be conducted by the composer.

In addition, a new CD for EMI Classics is to be released in the autumn, an “Armed Man” tour of Eire is scheduled for April while March sees the release of “Classic Jenkins…The Very Best of Karl Jenkins” a double CD compilation on EMI Classics of his best known pieces.

In June, a weekend festival of Karl’s choral works takes place in Quebec, Canada in June, conducted by the composer.

Specific dates for all these events will be posted in the New Year.