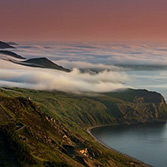 Karl and Jody Jenkins present the soundtrack to Wales: Land of the Wild

On working on this project, Sir Karl commented: “I was very happy to be asked to write the theme music for Land of the Wild, and to be able to collaborate with my son Jody Jenkins who has written beautiful music for the rest of the programme. Creating music inspired by this extraordinary footage of my home country of Wales was a privilege.”

Wales: Land of the Wild airs on BBC One (Wales only) on Thursday 11th April 2019 at 8pm. All UK views will be able to catch up via the BBC iPlayer. A Welsh language version under the title Cymru Wyllt will air on S4C.