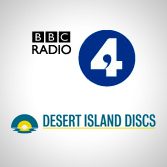 Kirsty Young's castaway this week is Britain's most successful contemporary composer, Karl Jenkins. He is most famous for developing a style that fuses his classical background with his interest in jazz and world music and his albums top the charts around the world. He was brought up in a small Welsh village and, after his mother died, lived with his father, grandmother and widowed aunt. His father taught him the piano when he was a child and in his teens he gravitated towards the oboe and went on to study at the Royal Academy of Music.