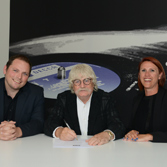 Sir Karl Jenkins, the most performed living composer, has signed to Decca Records in a multi-album deal, starting with the release of his new album, Symphonic Adiemus, on 29th September – the same day the work receives its world premiere in London. His incredible catalogue of recordings, including his hugely popular work The Armed Man: A Mass for Peace, will also move to Decca from 31st December 2018.

Symphonic Adiemus brings together some of the most iconic moments from Sir Karl’s Adiemus series in a new, enriched sound – transforming the works from female vocalists and ensemble to full choir and orchestra for the first time, after overwhelming demand from choirs across the globe.

Sir Karl Jenkins explains:
“Since 1995, when Adiemus first appeared with its unique blend of the classical and the ethnic, with my invented language for lyrics, I have been inundated with requests from choirs around the world for an Adiemus that, for the first time, included male voices as well as female. The idea of re-orchestrating a selection from the past led me to a new concept of increasing the forces across the board, making the whole sound massive and symphonic.”

Symphonic Adiemus is truly of epic proportions. There is an extended orchestra of over 100 musicians, including over 20 layers of classical and ethnic percussion, and a choir of 80 men and women. When performed live, there can be up to 250 people on stage! The new recording features the London Philharmonic Choir and the Adiemus Symphony Orchestra Of Europe, under the baton of Sir Karl Jenkins himself.

Over 20 years ago, Sir Karl has changed the way classical music was perceived as Adiemus – Songs of Sanctuary broke the chart music rule books. It caused a huge stir as the album was not considered eligible for the classical charts, despite its huge popularity among classical fans – selling a million copies worldwide in its first year. The album went on to achieve 17 Gold and 2 Platinum discs.

Originally from the Gower peninsula of Swansea, Sir Karl Jenkins has been decorated with a considerable range of awards for his services to music, including an OBE, a CBE, and a knighthood. There are over 250 performances per year of his work in more than 20 countries, and he has consistently been the highest placed living composer in Classic FM’s Hall of Fame. He released his autobiography, Still with The Music, in 2015.

Sir Karl’s style and integrity has always transcended musical boundaries, yet remained truly his own. His new album Symphonic Adiemus is great in scope and ambitious in its arrangement, yet always remains true to its roots. Fans of the original recordings are sure to enjoy this new version, which has been updated and energised to create something truly remarkable.

Symphonic Adiemus will receive its world premiere at the Royal Festival Hall in London on 29th September, followed by performances at Birmingham’s Symphony Hall (21st October) and The Bridgewater Hall in Manchester (19th November).